Published by Chief Instructor on December 28, 2017 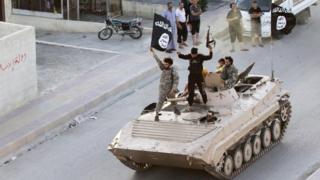 Most-wanted Thomas Barnouin was captured with some fellow French IS fighters.

One of France’s most-wanted jihadists, Thomas Barnouin, has been captured by Kurdish YPG rebel fighters in Syria, French media report.

Barnouin, 36, is believed to be linked to a French jihadist cell that included Mohamed Merah, who murdered seven people in the Toulouse area in 2012.

Barnouin was captured about 10 days ago in Hassakeh, north-eastern Syria, with two other French converts to Islam – Romain Garnier and Thomas Collange.

They were with so-called Islamic State.

Barnouin is described as a veteran IS member, who had been arrested by Syrian soldiers in 2006 while en route to Iraq with another French jihadist, Sabri Essid.

After being handed over to the French authorities, both were jailed for five years in 2009. But after his release in 2014, Barnouin went to fight for IS in Syria, accompanied by his wife and children.

A third jihadist was also jailed in France with Barnouin and Essid – Fabien Clain, who claimed the November 2015 Paris attacks in the name of IS.

They were in the so-called “Artigat” jihadist cell, named after a village where an extremist imam, Olivier Correl, gathered militant followers. He is believed to have inspired Mohamed Merah.

The French government says about 1,700 French citizens have joined IS ranks in Iraq and Syria since the start of 2014, and 278 of them have been killed. An estimated 302 have returned to France.

In June, the head of France’s special forces, Vice-Admiral Laurent Isnard, said his units were directly involved in street battles against IS in Mosul.

Quoted by Reuters news agency, he denied a Wall Street Journal report that the French Special Forces Command (COS) was specifically targeting French jihadists there.

US-backed forces pushed IS out of Mosul in July and out of Raqqa – the self-declared IS “capital” – last month.