Published by Chief Instructor on November 11, 2022 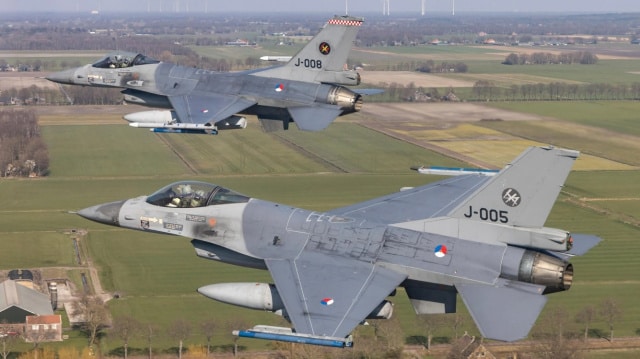 The Dutch government is considering transferring some of its surplus F-16s to a NATO ally so that the latter can in turn provide its MiG-29s to Ukraine.

According to EW Magazine, The Hague is considering giving surplus F-16MLU fighter jets to NATO allies in Eastern Europe so they can in turn donate MiG-29 fighter jets to Ukraine.

According to the portal Aviacionline defensa, one of the main candidates would be Bulgaria, which plans to retire its aging MiG-29 Fulcrum from 2023 and is interested in renting a squadron of Western fighters to ensure its air defense until the arrival of the first eight modern F-16 Block 70 models in 2025

Those responsible have been informed confidentially. For this deal to be effective, like all defense products made by American companies, Washington must give its approval.

Almost from the start of the war, Ukraine has been asking its Western allies for any kind of assistance, particularly fighter jets, to counter the Russian air force. Although the Ukrainian Air Force has requested the transfer of Western fighter jets, and voices are now being heard in support of this initiative, NATO is reticent about the idea.

There is a lot of talk about supplying Ukraine with MiG-29 aircraft from the former Warsaw Pact countries that became NATO members after the fall of the Iron Curtain. In particular, Poland, Slovakia and Bulgaria are mentioned, which still have these aircraft in active service.

In fact, in early July, Slovak Prime Minister Eduard Heger announced that he would donate 12 MiG-29s to the Ukrainian armed forces. In return, the Air Force of the Czech Republic will take over the protection of Slovak airspace. A similar arrangement was reached with Poland in early May, when its defense minister agreed with his Slovak counterpart that Polish planes would patrol its airspace if Slovakia handed over its MiG-29s to Ukraine. However, there are no clear indications that the transfer of the Slovak Fulcrum to Ukraine has taken place. What is clear, however, is that spare parts from these countries help keep Ukraine’s MiG-29s on the move.

Surplus F-16MLUs from the Netherlands may end up replacing Polish MiG-29s until the recently contracted Korean FA-50s arrive. Poland has 36 F-16Cs and 12 F-16Ds, which, although much more advanced than the Dutch fighters, would allow them to be absorbed without major complications, with much of the logistics being shared.

Official information was published on October 31, according to which the Bulgarian Air Force mainly consists of Soviet MiG-29 and Su-25 aircraft, which are no longer subject to maintenance and should soon be decommissioned.

In August, Acting Minister of Defense Dimitar Stoyanov started negotiations with Poland for the Bulgarian MiG-29s in an attempt to ensure that the fighters remain part of the Bulgarian Air Force for a longer time. He made a proposal to the Ministry of Defense to conclude a contract with Polish military repair enterprises for the maintenance of the MiG-29 in order to keep the machines airworthy until 2025-2026. The minister emphasized that “in aviation, the needs are the most glaring“, as they include not only aircraft, but also surveillance systems and infrastructure, with the military seeking solutions with the help of both allies and Bulgarian military factories.

Bulgaria has become one of the largest indirect suppliers of arms to Ukraine, selling record quantities since the beginning of the war, writes the Ukrainian publication “European Pravda”, referring to the publication in Euractiv. It is emphasized that Bulgaria and Hungary are the only two countries in NATO and the EU that have officially refused to send military aid to Ukraine. Bulgarian arms manufacturers and dealers sell their products mainly in Poland and Romania, from where the arms are exported to Ukraine, the publication writes.

On November 3, the Bulgarian National Assembly approved by a majority a draft law on providing arms to Ukraine.

Source: The Netherlands may give Bulgaria old F-16s in exchange for MiG-29s for Ukraine – Novinite.com – Sofia News Agency