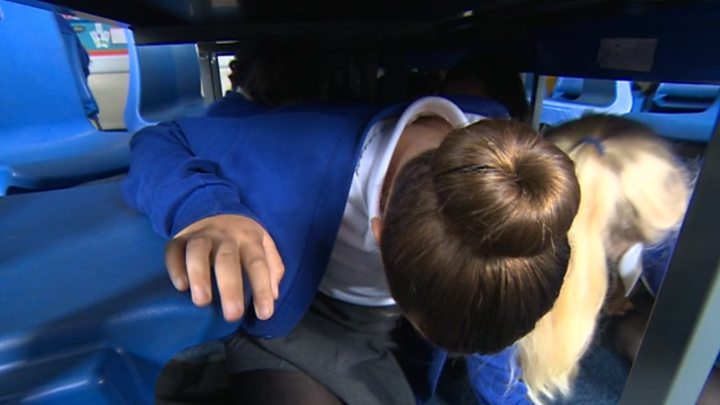 Reinwood Junior School is one of several in West Yorkshire which carries out lockdown drillsSchools need a coherent strategy for lockdown procedures in case of a dangerous event taking place on their premises, a teaching union said.The NASUWT said schools currently had ad hoc drills to deal with various threats and called on the government to put together a comprehensive plan.More than 200 head teachers in West Yorkshire have attended council-run seminars providing advice on lockdowns.The government said it “constantly reviewed” security guidance it issues.

Noxious fumesThe seminars, run in collaboration with police, the fire service and the North East Counter Terrorism Unit, give advice on managing a potentially violent or dangerous event in or around a school.

Five have been held since the beginning of 2016, with organisers aiming to have covered every school in West Yorkshire by Easter 2018.Scenarios covered include noxious fumes from a fire or chemical incident, weapons in school, animals in school grounds, aggressive pupils or parents and bomb threats.

Many schools across the UK practise lockdown drillsHuddersfield’s Reinwood Junior School is one of several in West Yorkshire which carries out lockdown drills, with pupils and staff practising twice a year.

After a pre-recorded alarm and message is played from the tannoy, pupils get under tables, teachers lock classroom doors, lights are turned off and window shutters pulled down.

Ian Darlington, Year Six teacher at the school, said it was better to practise so that it “almost becomes second nature” to the pupils.

“Initially it might appear that we are raising concerns, raising children’s fears, but in actual fact they’re quite calm doing it now,” he said.

“They understand the importance of doing it and it doesn’t worry them.”

Chris Keates, NASUWT General Secretary, said: “Responsibility for ensuring security and terrorism preparedness should be the responsibility of the whole governing body.

“It would not be appropriate for the government simply to require schools to have preparedness plans in place and assume that they are able to do this.

“Schools will already have plans in place to respond to a range of emergency scenarios, but it’s important that they are given specific advice and support on what additional provisions are considered necessary and the support and advice to implement them.

“A Department for Education spokesperson said: “Schools have a legal responsibility to ensure staff and pupils are safe.

“We provide a range of support for schools and constantly review guidance to ensure it is comprehensive and up to date.”