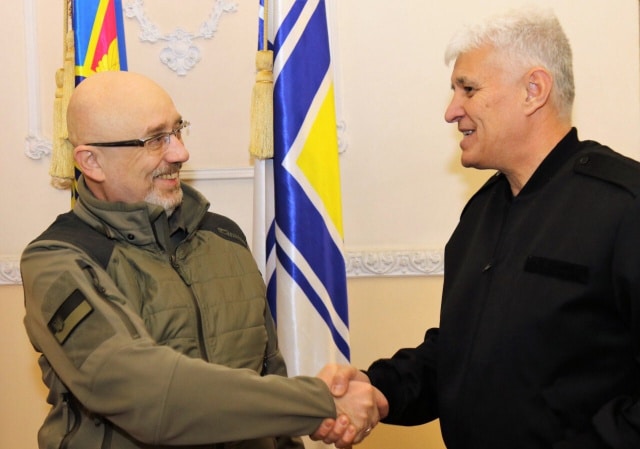 Reznikov expresses gratitude for the decision of Bulgaria to send military aid to Ukraine.

There has been no official announcement of the visit by the Ministry of Defense.

The Parliament ratified the agreement between the defense ministries of Bulgaria and Ukraine on the free provision of armaments, equipment and ammunition. 166 people’s representatives voted “in favor” and 48 were “against”. BSP and “Vazrazhdane” voted to reject this contract and not to ratify it.

The list of weapons will not be published in the State Gazette, the deputies also decided.

The Territorial Defense Forces of Ukraine are equipped with Bulgarian anti-tank weapons, the Ukrainian Ministry of Defense announced. The announcement was quoted by BNT

Bulgarian anti-tank grenade launchers have already been sent to the Territorial Defense Forces of Ukraine. However, it is not clear from the announcement whether these weapons are part of the military aid to Ukraine voted by the National Assembly days ago, or private supplies.

Anti-tank weapons are intended to destroy tanks, self-propelled artillery systems and other armored vehicles, as well as destroy enemy forces.

The brigade says that with the new weapons, Ukrainian anti-tank units have trained and demonstrated the ability to defeat enemy armored vehicles and manpower.

The ministry stated that the anti-tank weapons were equipped with special optical systems, as well as with Bulgarian shells and explosives, which were also supplied.

This type of weapon can destroy enemy forces in shelters and brick buildings, the website of the Ministry of Defense of Ukraine also points out.

These projectiles can penetrate 300 millimeters of armor and hit targets at a distance of 1.3 kilometers. The anti-tank weapons were produced by “Arsenal” in Bulgaria.

The Ministry of Defense of Ukraine also states that another type of Bulgarian anti-tank weapons has also entered service with the Ukrainian army.