Published by Chief Instructor on April 23, 2021 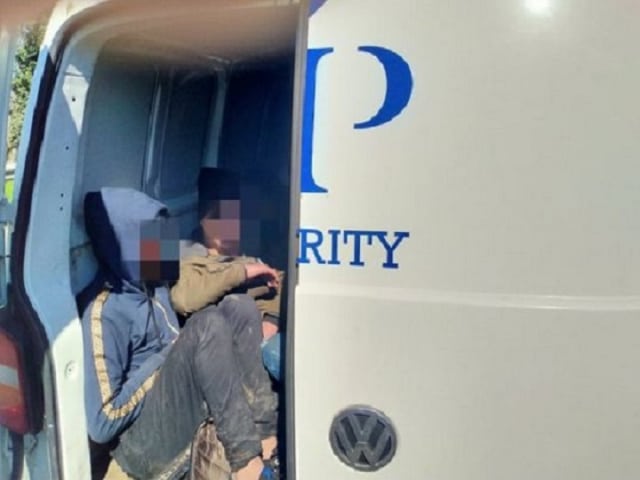 A second incident involving a cash-in-transit van has occurred in Bulgaria within two days. After robbers snatched about half a million levs from a cash delivery van on the Struma Motorway on Wednesday, police caught 13 illegal migrants being transported in a van disguised as a cash delivery car. The difference, however, is that the second one was not real, and the traffickers simply pasted on it the logo of one of the famous security companies in Bulgaria.

During the special police operation on April 22, in the Black Sea coastal area between the bridge over Karaagach river and the town of Kiten, officers of the General Directorate “Border Police” stopped for inspection a Volkswagen van driven by a 52-year-old man fromPlovdiv. During a check in the cargo compartment of the van, border police found 13 men, illegal immigrants – undocumented, who claimed they were Syrians. They and the driver are put in custody.

It was found that the car, branded with the logo of a cash collection service, was not owned by that company and it had not been implicated in the case, the stickers were fake and were placed to avoid possible police inspection. The van has false registration plates copying the plates of a real cash-in-transit vehicle.

The illegal migrants and the driver have been detained. The driver was charged and his detention extended to 72 hours by a prosecutor’s order. Pre-trial proceedings have been launched in the case at police department of Tsarevo.

On board a van there was also an underage Bulgarian national who was questioned as a witness in the pre-trial proceedings.

Investigation on the case is underway under the prosecutor’s office supervision.