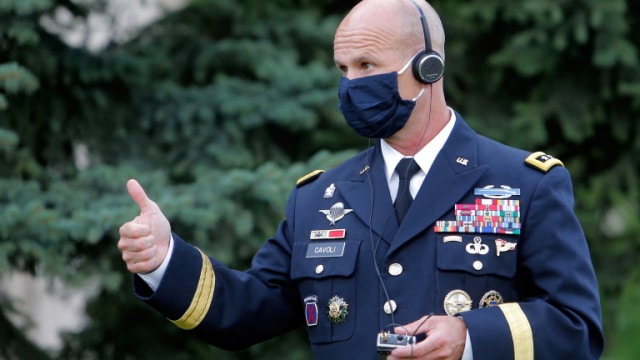 The Army is concentrating this year’s major European Defender exercise on training for high-end warfare in the Balkans and the Black Sea, the service’s top general there said last week.

Speaking at an online forum of the Association of the United States Army, Gen. Christopher Cavoli, commanding general of U.S. Army Europe and Africa Command, said final planning is underway for the exercise scheduled for late spring or early summer. It would take place around the Black Sea, waters that have drawn an increased amount of American naval presence through freedom of navigation operations, and emphasize the use of high-end enablers in conflict.

Particular attention will be paid to Romania, which is developing a Multinational Division for deployment, and Bulgaria, now receiving American advanced air and missile defense systems, he said.

The exercise also reflects the changes in his command, bringing Army troops in Africa under his control. He said the structural change allows him “to think hemispherically” about security that also coincides with the concerns of Southern European allies from Portugal to the Black Sea. “NATO is not a one-problem alliance,” he said, referring to Russia.

The Defender exercise series is designed to highlight “the swift response of the United States Army to deploy a large force” to the continent in a crisis. When conceived several years ago, the series was designed to replicate the Reinforcements to Germany exercises the Army conducted in the Cold War. It again is to serve as reassurance to allies and a deterrent to Russia. The specific threat came from the Kremlin’s seizure of Crimea and attempts to send Ukraine into civil war in 2014.

Last year’s exercise, curtailed by the outbreak of the COVID-19 pandemic, saw more than 10,000 soldiers transported from bases in America and 13,000 pieces of heavy military equipment shipped to Bremerhaven, Germany for the series of linked and unlinked events in northern Europe.

Although the large-scale field exercises were scrubbed, Cavoli said, “we were able to experiment (in) how we would operate” as a joint and combined warfighting headquarters. The idea was “to achieve convergence” among American and allied forces across all domains without breaking operating tempo for combat.

He said allied nations judged this a success.

Cavoli, speaking from his headquarters in Wiesbaden, Germany, said that since 2015, the United States and Europeans have expanded the scope of all exercises and where they are being held for a number of reasons.

“We’ve been very methodical where we’ve been pushing forces” to see what was available and the conditions in Eastern and Southern Europe.

In Eastern and Southern Europe, “the military infrastructure [was] designed for the Warsaw Pact pointing westward.” He said this was true of highways, rail lines and bridges that could support Soviet-built equipment through the late 1980s, but now would have to bear the loads of 80-ton M1A-2 Abrams tanks when used in a crisis.

In every exercise, he said there is a checklist of these areas to inspect and there is follow-up to see what was done to correct the problems that also exist in ports and airfields. Cavoli said “the informal partnership” his command has with the European Union through NATO in making them ready for military use in a crisis is working well. He noted the steady EU investment in upgrading facilities.

At the same time, he worked with the EU to standardize a form for border crossings and is also working with individual nations from Lithuania to the Netherlands to reduce the time required for advance notice of border crossings.

Cavoli said, “we’ve increased the size and ambitions of the exercises” as well. In addition, he predicted that more nations in Europe and possibly in Africa would be interested in exchanging officers with the United States, as the French have done. He noted an increase of voluntary requests to serve in the advanced task force headquarters in Poznan, Poland from officers in Baltic and Black Sea nations and the Balkans as a hopeful sign.

“I’m a little bit worried about sustainment” of these dual-use projects related to the economic slowdown in the pandemic, he said. Earlier, Cavoli raised American concerns about Chinese investment in critical infrastructure in Europe and both Chinese and Russian investment in Africa to gain economic and political influence.

“Russia and China are extremely active in competing for access in Africa,” he said.

Cavoli’s command was expanded to include Africa Oct. 1 as part of a Trump administration plan to draw down forces in Iraq and Afghanistan, re-deploy some of them to forward bases in Poland, cut the Army and Air Force presence in Germany and return others to home stations in the United States.

Where the redeployment plan stands now is an open question for the Biden administration.https://usni.org