Spain has sent Warships to the Black Sea and is Preparing Fighter Jets for Bulgaria – Novinite.com – Sofia News Agency

Published by Chief Instructor on January 21, 2022

Spain has sent warships to join NATO‘s naval forces in the Mediterranean and Black Seas as tensions in the region rise due to the build-up of Russian troops on the Ukrainian border, Defense Minister Margarita Robles said on Thursday.

A minesweeper is already on its way and the frigate will set sail in three or four days, Robles told reporters. The government in Madrid is also considering sending fighter jets to Bulgaria, she said.

According to Spanish media, it is a matter of extending ahead of the time the Spanish participation in the Permanent Naval Groups of the Alliance, as well as sending Eurofighter planes to Bulgaria by the end of February. It is a mission from the so-called Reinforced Air Police, i.e. Allied airspace surveillance, which comes just in time due to the constant presence of Russian aircraft flying in the area of ​​responsibility without identifying themselves.

Several sources in the defense have confirmed to larazon.es that the operation is already planned and that six Eurofighters will be deployed by the end of next month, along with a contingent of 100 troops. 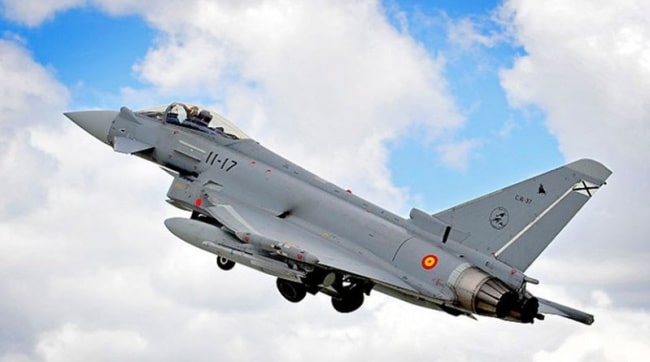 Their term will be 6-8 weeks, but some details need to be clarified, including the base where they will be located. Last year, Spanish fighter jets took part in the same mission, but were based in Romania.

The desire of the Ministry of Defense in Madrid was to participate every year in air policing in the area, but by 2022 all the quotas of allies were filled and it was decided to use Spanish aircraft next year. But amid growing tensions, NATO has asked Allies to respond, and Spainhas responded.

The goal of the minesweeper groups is to ensure free access to the coast of each NATOmember state.

“Russia cannot tell any country what to do, so NATO will defend the sovereignty of any country that can or wants to join NATO,” she said.

Spain‘s preference is for an “extremely diplomatic response” to resolving the conflict, Robles added.

Spain‘s contribution to NATO‘s military deployment in Eastern Europe comes after Foreign Minister Jose Manuel Alvarez and US Secretary of State Antony Blinken discussed a coordinated response to Russia’s threat to Ukraine at a meeting in Washington on Tuesday.

Russia has amassed tens of thousands of troops along its border with Ukraine, and Western countries fear Moscow is planning a new attack on a country it invaded in 2014. The Kremlin denies planning an attack, but says it could take unspecified military action if its list of demands is not met, including NATO‘s promise never to accept Ukraine as a member.

Western officials, diplomats and former officials told Reuters this week that NATO – established in 1949 to deter the Soviet threat – had been forced to consider reinforcements that contradicted Putin’s demand that the alliance not expand its defense infrastructure to the east.

Denmark has said it is sending a frigate to the Baltic Sea this week, and French President Emmanuel Macron has offered to send troops to Romania. Further decisions on the troops could be made at the NATO summit in Madrid in June, diplomats and officials said.

Source: Spain has sent Warships to the Black Sea and is Preparing Fighter Jets for Bulgaria – Novinite.com – Sofia News Agency