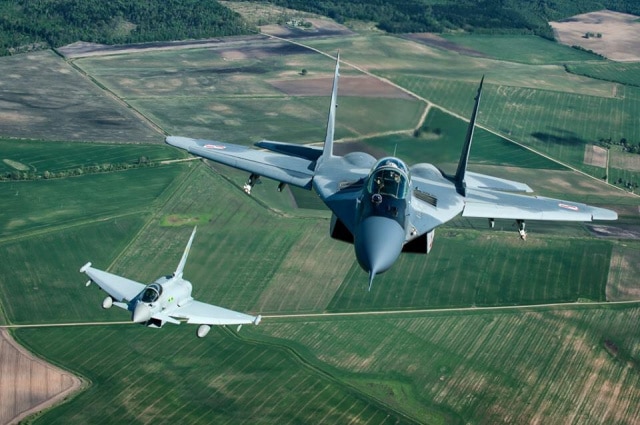 The implementation of joint tasks on enhanced airspace protection (Air Policing) by the Bulgarian and Spanish Air Forces begins with an official ceremony on Thursday. This was announced by the press center of the Ministry of Defense.

The event, which will take place at Graf Ignatievo Air Base, will be attended by Chief of Defense Admiral Emil Eftimov, Commander of the Bulgarian Air Force Major General Dimitar Petrov, Ambassador Extraordinary and Plenipotentiary of the Kingdom of Spain to Bulgaria H.E. Alejandro Polanco Mata, Commander of the Spanish Joint Operations Command, Lieutenant General Francisco Braco Carbo, and Deputy Commander of the NATO Joint Operations Center in Torrejón, Brigadier General Athanasios Sectos, who will present the certificate to Spanish servicemen.

During the certification, the aviation equipment will be presented, with which joint tasks on air protection will be performed. A static display of the MiG-29 and Eurofighter EF-2000 Typhoon II will be organized.

Bulgarian and Spanish fighters will jointly perform tasks until March 31, 2022, according to a decision of the Council of Ministers of January 24, 2022. The mission is implementing measures to ensure the security of member countries on NATO’s eastern flank and will be implemented according to plans and the procedures of the Alliance’s Integrated Air and Missile Defense System (NATINAMDS).

When performing the joint tasks of Air Policing, the Bulgarian fighters on duty will be used as a priority. The protection of NATO airspace is a peacetime collective defense mission. Its purpose is to ensure the integrity and security of the airspace of Allied allies.