Published by Chief Instructor on December 11, 2021 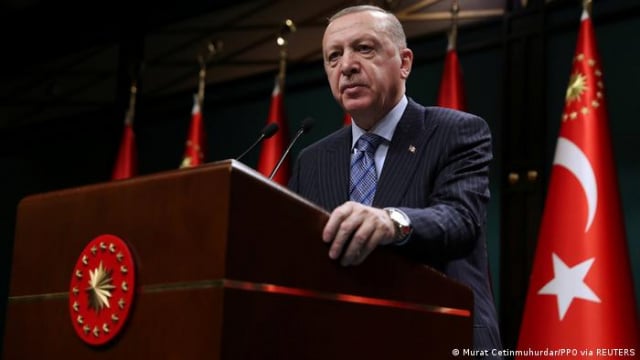 Erdogan spoke at the official opening of the 16th Conference of the Parliamentary Union of the Organization of Islamic Cooperation at the Dolmabahçe Palace in Istanbul.

As everyone knows, developments in Afghanistan increase the risk of an influx of migrants. Our country, which has taken in about 5 million refugees, 3.6 million of whom are from Syria, cannot cope with the new influx of refugees, the Turkish president was quoted as saying by CNN-Turk.

We are working to prevent chaos from re-emerging in Afghanistan. The repeated destabilization of the situation in this country is inadmissible. This will also increase the influx of migrants. Countries such as Turkey are suffering the worst from the influx of migrants, the Erdogan news agency quoted Erdogan as saying.

We have no right to turn our backs on the Afghan people, he stressed.

Erdogan also spoke on the Palestinian issue, stressing that protecting Jerusalem means “protecting the interests and values ​​of all of humanity.”

He said “Israel is putting pressure on Palestinians” and added that violence against Palestinians would not benefit any country, including Israel.

Unfortunately, the “unjust blockade of the Gaza Strip” continues, the Turkish leader said.

Muslims around the world are currently battling not only the coronavirus and humanitarian crises, but also growing Islamophobia, Erdogan said.

He said Ankara had helped 160 countries and 12 organizations during the pandemic. The Turkish leader added that Turkey has sent vaccines against COVID-19 to 11 countries.

In fulfillment of the mission of the Armed Forces “Contribution to National Security in Peacetime” from 20.00 on November 1, 2021 over 350 servicemen with more than 40 units of equipment from the Land Forces Read more…