Defense Ministers of Bulgaria and Spain at an Inspection at Graf Ignatievo Air Base – Novinite.com – Sofia News Agency

Published by Chief Instructor on February 22, 2022 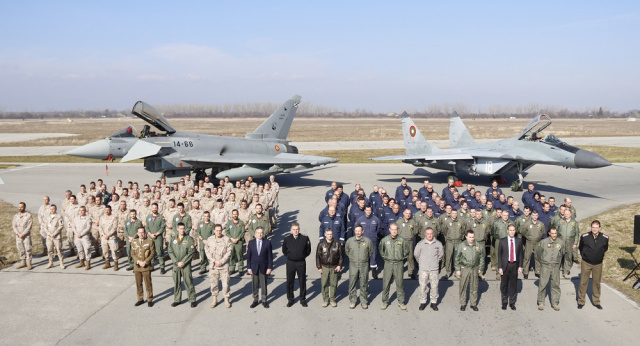 The Ministers of Defense of Bulgaria and Spain arrived at Graf Ignatievo Air Base today. They will inspect the joint airspace guard performed by MiG-29 and Eurofighter Typhoonfighters.

The crews of 4 Eurofighter Typhoon fighters and another 130 members of the Spanish contingent are already based and certified in Bulgaria for these tasks.

After three days of reconnaissance flights in Bulgaria, the Spaniards completed the first real task last Thursday. Then, due to activity in the international airspace over the Black Sea, a pair of fighters flew in our area of ​​responsibility.

Violators were not detected. Bulgarian and Spanish pilots are on joint duty on the ground but do not fly together. The Eurofighter Typhoon fighters, which have 15% metal on their surface, and the Air Force’s MiG-29 fighters are on standby all the time.

The flights and the selection of a pair for the mission are managed by the NATO Joint Air Operations Center in Torrejón.

For the first time, the Bulgarian and Spanish Air Forces jointly perform a wide range of airspace protection tasks and this is perceived as another good opportunity to develop capabilities important and necessary for the current international situation in the region.

Source: Defense Ministers of Bulgaria and Spain at an Inspection at Graf Ignatievo Air Base – Novinite.com – Sofia News Agency