Published by Chief Instructor on August 6, 2022 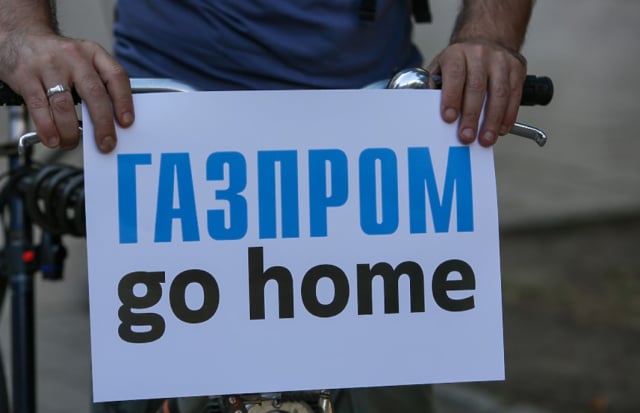 Hundreds gathered at a protest at “Dondukov 2” street against President Rumen Radev and his caretaker government.

The demonstration was entitled “Bulgaria – Independent of Gazprom” and was organized by the political party “Democratic Bulgaria”. A protest at the same place and time was also announced by civil activists from the recent anti-government demonstrations. The two protests merged into one.

The crowd chanted: “Down, Radev!”.

“Let’s go out and declare our intransigence against the Kremlin’s gas boot!”, DB urged. From there they came out with a position according to which the official cabinet is making a dangerous turn towards Moscow. “We will not allow the restoration of our role as a Transdanubian province! With all its actions so far, the official cabinet shows that it is changing the geopolitical direction of Bulgaria and leading us to dependence on ‘Gazprom’, sabotaging the country’s energy diversification. Radev‘s caretaker government uses procedural grips to prevent the certification of the interconnector with Greece, through which we can receive larger quantities of cheap Azeri gas,” the organizers wrote.

In front of the presidency were former MP Martin Dimitrov and pulmonologist Alexander Simidchiev from Democratic Bulgaria. Among the protesters was Ivaylo Mirchev.

“It’s time to move on. All of Europe is looking for alternatives, and against this background, Bulgaria is starting to go back to its dependencies,” said Dimitrov. According to him, this is part of the hybrid war.

The leaders of the “We are coming!” movement Nikolay Khadzhigenov and Arman Babikyan called on their sympathizers to support the spontaneous protest. Within just four months after the start of the war in Ukraine, more than 4,200 tonnes of Bulgarian weapons in 60 planeloads were flown to Rzeszow, Poland, with the approval of then deputy prime minister Read more…

Bulgaria Suspends Visas for Russians with Property in Bulgaria and for Tourists from Russia – Novinite.com – Sofia News Agency

Bulgaria will stop accepting documents for tourist visas for citizens of Russia, RIA Novosti reported, citing the Association of Tour Operators of Russia (ATOR). The measure applies to both tourists and property owners in Bulgaria. “According to the tour operators, the Read more…

Russia is terminating the validity of the certificates issued to three aircraft repair enterprises – two in Bulgaria and one in the Czech Republic, the spokeswoman of the Russian Foreign Ministry Maria Zakharova announced at a briefing, quoted by TASS and BGNES. Read more…