Published by Chief Instructor on December 27, 2021 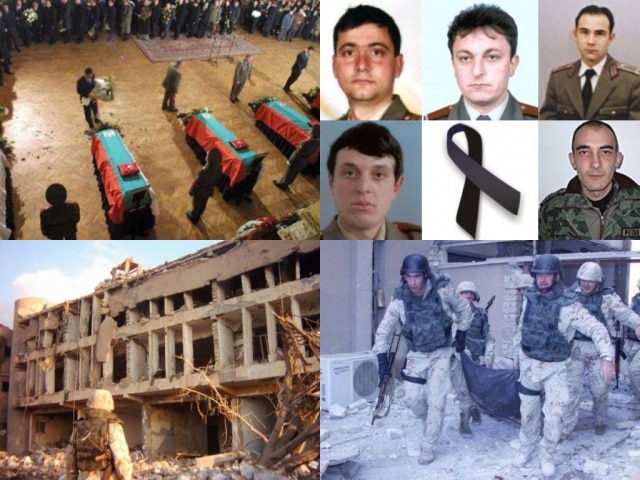 Today marks 18 years since the tragic incident in 2003, when five Bulgarian servicemen were killed and 27 others were seriously injured in a suicide truck bomb attack on our base in Karbala.

On December 27, 2003, at 12.45 local time (11.45 Bulgarian time), a tanker exploded near the fence of area “1” (India), where the headquarters of the Bulgarian battalion is. It broke through the barriers and exploded near the fence. This caused great destruction in the camp, and the battalion headquarters building was destroyed. Fighters from the ‘India’ region were evacuated to another area. The wounded – 27 servicemen were evacuated to Baghdad, to the Polish divisional hospital in Babil and to the medical center in the Bulgarian battalion.

After that day, five Bulgarian families are not the same, children are left orphans, parents do not stop staring at the door to open and their children to come home. In Radovets, the native village of officer candidate Ivan Inzhov, the natives will never forget his tragic death. The square of the village bears his name, and a memorial plaque has been placed in the village park, where often people from the village stop to lay flowers and pray for Ivan’s soul. For them, our fallen fighters are real heroes.

Source: 18 years Since the Attack on the Bulgarian Base in Karbala, Iraq – Novinite.com – Sofia News Agency